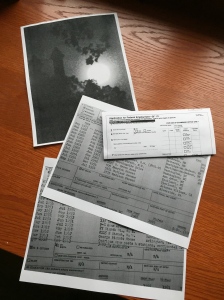 An enormous full moon rises over low hills east of Riverside, California. I am two, maybe three, and cling to my mother in the cool twilight. We have come outside after supper to watch. It will be something to remember, she says.

It has remained one of my earliest and most enduring memories. In my mind’s eye the moon looms above the horizon and seems to move toward us and even though I know it could not really have filled half the sky I have always known that something important happened. Somehow my mother and I never talked about it, not in the years we were together nor after she left, and I’ve never understood what exactly we witnessed. The image is like a tattered snapshot of recall with only the place—Riverside—to identify it.

The first time I heard of something called a “supermoon” was when my meteorologist niece sent me an article in 2011 (this seems to have been the first time that the term, originally coined by astrologers, crossed over to popular science writing). On March 19, the NASA story said, a “full moon of rare size and beauty will rise in the east at sunset … a super ‘perigee moon’—the biggest in almost 20 years.” What was going to happen was uncommon but not unprecedented, and this official encouragement to stop in our usual routines to go outside and wait for the moon caught my attention. It was the kind of thing my mother would have made time for.

Two years later, leaving Gambier, Ohio at the end of a week-long writing workshop, I found myself gazing at a full golden moon rising above the turrets of Bexley Hall. A headline in that day’s Columbus Dispatch, I remembered then, had read “Super Moon Looks Bigger Because It’s Closer.”   While the week’s essays had all been completed, I felt there was an unfinished assignment about another such moon. After a week at Kenyon, everything seemed like it might make a good essay, but I’d also fallen in love with the nonfiction “braided” narrative form. I could combine elements of memoir with explorations of lunar phenomena. What causes a supermoon? Why is it rare? The moon could serve as an extended metaphor to tie together the difficult story of my family, my mother, maybe even myself. It would require some research into both astronomy and family history.

The former would turn out to be a lot easier than the latter. Star charts, astronomy books, and NASA’s website made it possible to understand the complicated three-dimensional clockwork of our moon and solar system, while trying to piece together the fractured history of my own life was more arduous work, both cognitively and emotionally. Retrieving my father’s Civil Service employment form was the breakthrough that showed me, for the first time, where we had lived when and how many times we had moved (nine moves during my parents’ marriage, six more by the time I left home).

We are in Riverside and I am almost three and my mother and I have seen the amazing moon that I will remember for the rest of my life, rising enormous and red. And then, I know this must be true and perhaps I remember it, we watch as the moon rises further and seems to become smaller, turning from pink to yellow as the sky deepens to blue, paling to a flat silver coin pasted on a black sky. Did we stay outside until dark? Did the stars come out? I might have felt the air becoming chilly. Maybe I remember being carried home. I know when it was and I know where it was and I know, finally, that I was there.

(My 7500 word essay “Supermoon” is currently seeking a literary home.)